Ok, so here it comes, a few exercise I have been doing during my rehab. A few of you have been asking, but what you need to know is that I have been doing these exercises because of my ACL reconstruction (graft from hamstrings) rehab. This is not only to “get strong knees for running or skiing”. But yes I do believe it´s good for that too, but just so you know the reason why I am doing this.

I also think that this kind of specific training should be done careful and with knowledge, then it gives so much more than if we “just do” the exercise but don´t understand it fully, the purpose and the muscles it should involve.

I think for me when I first understood the exercises I didn´t needto do them often, as long as when I did them I did them properly. But this is my philosophy as well, if I was a downhill skier, I would probably have been working tons of hours of strength.

Single leg explosive squat. Stand on one leg, bend it as far as you feel comfortable, think good position with the knee, heel, hip and on the way up you push so it because explosive and you jump. I do 3 x 10. Some seconds of rest in between every rep.

I also do single leg squats on balancing bord.

Jumping from half ball to half ball ( see picture wich kind of ball I mean) think good position here as well! One or two legs. I do this with speed, and the body control is important. I started slow at the beginning and with two legs. Now I do both legs and single legs. 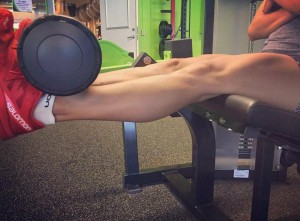 In the beginning of the rehab I did seated leg press to gain quadriceps strength and now before the ski season begins I will do a little more of this again. I do it seated just because I have never done squat with weights. If I would feel comfortable doing that I would do that, but I don´t.

For the hamstrings I do yoga for example warrior 3. See picture! Here I play a little with the upper body weight leaning forward and down, to work more with hamstrings!

I also do hamstrings curl in the machine and backward plank with one leg and with bend legs to reach different parts of hamstrings.

So these are the core exercises I do and have done!