Ian Corless (Talkultra and UK skyrunning) told me briefly in the beginning of the summer season about this new exciting race they would have this year in Scotland. I didn´t plan for it as running the short and long sky series already made my summer pretty stuffed with races.

In July I finally decide to go there, and jises afterwards I´m so happy that I went!

Flying into Glasgow and after a 2 hour drive your in the middle of nowhere. It´s a few houses, a small skiresort and nothing more. Except mountains. Beautiful ones!

I arrived on Thursday due to a busy week of hours of training and went out for little jog on the west highland trail. I saw the mountains we where going to run in and it looked beautiful!

The race started with a 7 km pretty runnable trail, to the foot of Curved ridge. 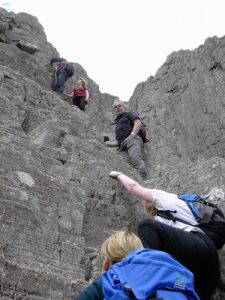 Picture found on google. Here you see how cool it was!

There the climbing started. After some hundred meters on a trail we started climb. I mean that kind of easy climbing /scrambling where you need your hands. It was awesome. Everyone I was running with was really carfeul and moved well in the first climb. Coming up to the summit we started the long ridge crossing, full of beautiful but technical running. Rocks, no trail just following the written line. Some parts was very runnable on still tricky trails but it was nice to stretch out the steps and run fast. Here I did my fastest kilometre in 3.30 pace.

After this part we started the climb to the highest point. The uphills was grassy and steep, really enjoyable, not like the alps, more like Scandinavia. It´s almost harder because every step is soft!

After this beautiful part we started descending a technical and wet trail down to the road and aidstation, a little more than half of the race was now done! I looked at my watch and I had been running for 4,5 hours. I counted about 3 hours more to go even though I had no really idea of what was waiting.

After the aidstation I know it was a vertical km to take us up to the Aonach Eagach   ridge, a long, exposed and pretty technical part of the race. (grade 2 climbing) Waow how much I enjoyed it. There I figured out I was second overall with Joe Symmonds 10 minutes away. I didn´t really think about it, I just enjoyed going fast in the technical terrain. 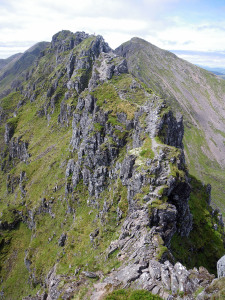 Here is a picture of the ridge, (found it on google) It does´t make it fair though, it was more exposed and technical than it looks like!

With only 12 km to go it flattened out, and became more runnable, soft and undulating and really hard! I heard I had closed the gap to 7 minutes but I couldn´t manage myself to go any faster.

Coming down to the aidstation with 7 km on a nice, but still undulating trail I had 6 minutes to him. Could I hunt him down?

I didn´t hink I was gonna go for it, if I managed to come 2 I would be super happy!

Mark harris, a guy I had been running with on and of the race cought me there and we where running chatting together until the last km, then he asked if he could try to push little harder. I said yes of course and I said I will try to follow. So I did, but I also had more energy to leave a little gap to finish 2! I would not have left him if he didn´t proposed to push but it was all friendly 🙂

It was a very friendly and energizing atmosphere in the race and I´m so happy to have meet all of the ones out there, working at the race, cheering or hiking.

I have been running many races, but this one is special. This is Skyrunning.

I recommend that if you want to do it. You need to be a mountain runner. Not only runner on nice trails in the mountains. You need to have experience on wild mountains, climbing and scrambling. And that is so cool to have something to work for ay!

Glen Coe race I will be back! Thanks for having me!