Hit enter to search or ESC to close
Blog

For many years I have been vegetarian, first time when I was 14 years old, and the reasons have more or less been the same, just slightly different. I have based the decision on what I believe by gaining and constantly searching informations about sustainable, way of eating. Sustainable both to the planet and my body.

That is the reason why I also had years when I ate meat. It was because I had local hunted meat and local caught fish available, and I believed that living up here in the north, that was the most sustainable way of getting nutrition, as well as living from what the environment you choose to live in can get you.

Until 2 years ago I ate a little fish every now and then, as I still was thinking that´s it´s a good way to live form the environment up here, but also at the time I stopped, my body just didn´t want to have it anymore ( Has this happened to anyone else? ! It sounds so silly but I can´t describe it in any other way!), also here my mind caught up after a while with reasons and fundament for why this is right for me. (Coming back to this after.)

This November, where I spent all the month at home, I was thinking it was a good month to try a vegan diet. But.. My mind wasn´t there yet. I did some research about it, learnt more recipes, trying to understand why vegans chose to be vegan. And then it finally hit me. I found the reason that was big enough to make me take the step to try a month. I started to see veganism from a perspective of equal value, no matter if you are born as a cow, bee or as a salmon.

My sister is saying that I´m such hippie when I talk like this, and hey maybe I am, but this was one of the biggest the reason that made me stop milk products, honey and eggs.

People told me that if I drink local milk by small farmers it´s ok, but what I found out is that it´s more or less the same, maybe they get more time in the open air, feeding grass, but the cows still get forced to get pregnant to be able to have the milk. And a cow that are treated like that ( all cows in milk industry small as big as far as I know, please write to me if you find out something else, but it makes sense when a liter of milk is around 1-2 euro, and farmers need to get paid too ay) , live for like 5-7 years!! But in a normal way of living they get around 20 years old. This hurts my heart so much.

So this was the 2 main reasons that made me want to try a vegan month.

After that it was easy. As a vegeterain I´m used to eat a lot of greens, beans and lentils so the cooking was fine. I never felt that I needed more energy. Sources of fat as coconut oil, olive oil, avacadoes, cacao, beans etc is great sources of getting enough kcal. One could find many alternative in the supermarket for burgers, sausages etc, but I prefer to make it from scratch with beans and lentils. Tofu is another great alternative to “fast food”.

I felt good in both my body and mind, maybe the biggest change was that I felt very good in my mind. All the thinking and finally doing it.

These last days I have been drinking a little milk and eating cheese. But now when I´m writin this I ask myself why?

I know this is a very touchy subject, people can get upset, but I just wanted to write you my thoughts and my experience. I also know that in some cultures it´s almost not possible to be a vegan, and I´m not judging anyone, I just think it´s interesting to hear peoples choice of eating, if there´s any thoughts behind, and if there´s not, maybe it can be?

Someone said to me that humans would´nt be as evolved if they had not started to eat meat, and it might be true, I think we are so adaptable which made the evolution possible, but I also think is interesting to think is what if we 70.000 years ago would have choosen to see all living organism as something we should respect in the way we possible can, would the world look different? 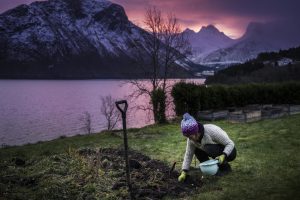